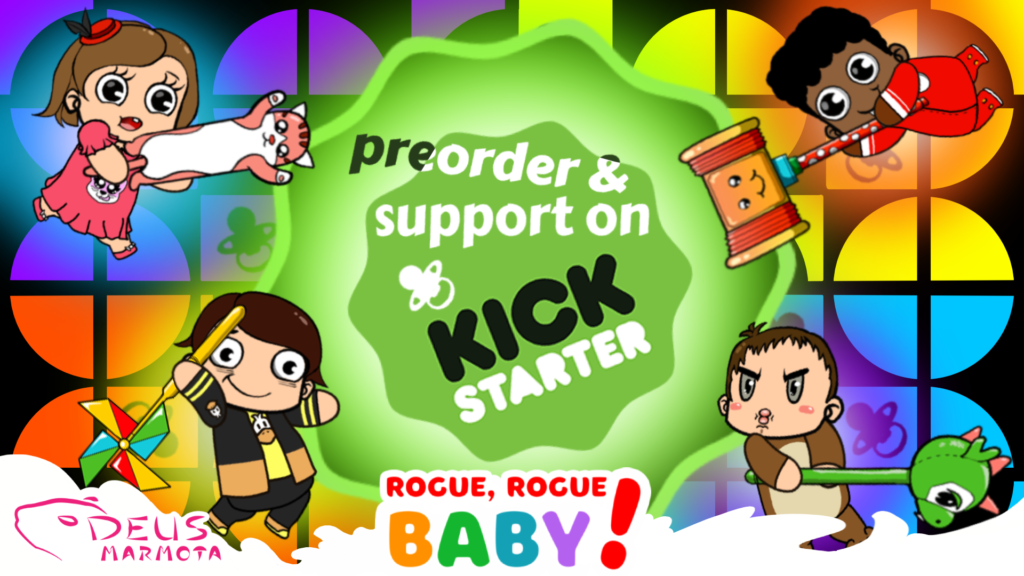 Goal
24%
Back it on Kickstarter!
The daily life of the studio’s co-founding couple was turned upside down in September 2022 with the premature birth of their adorable baby, Nathaniel.
Rogue, Rogue, Baby! is a love letter to Nathaniel, but also to all babies, and provides a reminder of the safety measures needed when you have a baby.

Hard to be a baby!
During the afternoon nap, the baby monitor in the baby’s room has no power and the parents can’t hear their baby who has just woken up. This one decides to brave the dangers and to leave to the research of his parents.
From then on, the little hero will have to go through a huge house, filled with many dangers, most of which are often unsuspected by his parents. This time, the baby in you will face his terrible enemies with a milk gun and a diaper launcher!
Rogue, Rogue, Baby! is a fun, frenetic and feel good roguelite.
Alone or with others, conquer your home. Upgrade your baby by unlocking new weapons and skills as you go and try again and again to get further and further. Face enemies with various attacks and fill up the securedex with each new enemy you meet. Evolve in rooms with looping exits to
surprise your opponents.
Grab a change of diapers and head out on an adventure!
Previous
Next

The game is based on the principle of evolution of your character. At the beginning of the adventure, you won’t have access to many skills or weapons. You will have to try again and again to explore dungeons in order to collect more and more collectable items. These items will allow you to improve your equipment and your skills permanently until you have enough strength to reach and defeat the final boss.

In multiplayer, the principle of cooperation has been pushed to the maximum:

First, the item counter is shared by all players. Everyone benefits from the character upgrades and new appearance customizations that are unlocked, regardless of which team member has obtained them.

Second, as long as there is at least one player left in the game, game over will not occur and everyone will be “back on their feet” upon entering the next dungeon room. So be prepared to cheer your friends on with all your might if they become your last hope to get back into the game!

Third, the “securedex” is also common to all players in the game. It doesn’t matter who unlocks this or that encyclopedia box, everyone benefits from it.

In solo game (or in game with less than 4 players), don’t worry, the lack of loyal allies is compensated by obtaining additional lives. The number granted will be based on the number of players you have left when exploring on a four player basis.

5 AREAS TO EXPLORE
4 TYPES OF WEAPONS
CUSTOMISABLE CHARACTER: unlock different body and face parts as you play to customize your baby!
UPGRADES: collect coins, unlock new skills and become more and more powerful as you run!
SINGLE PLAYER OR LOCAL MULTIPLAYER: up to 4 players!
FAMILY MODE: a mode accessible to all ages to have fun with friends or family!
HARDCORE MODE: a difficult mode for real roguelite fans!
BOSS VARIES: fight one of three different bosses in each area!
POWERFUL FINAL BOSS: don’t expect to defeat him until you have greatly improved your baby!
SECUREDEX: find and destroy all the enemies inspired by real-life dangers faced by babies to complete the securedex!
DIFFERENT ROOMS: in addition to the classic battle and boss rooms, solve puzzle rooms to unlock rare customizations!

Back it on Kickstarter!